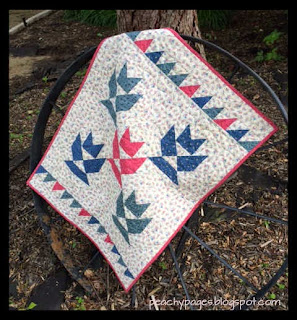 Finally, a finish to report!  This cute little basket pattern is called "Bath House Blues."  I just don't see anything "bath house" about the quilt - so I chose colors that might lend themselves to the name (the quilt pictures on the pattern features browns and tans).  Does anyone else see it?  Anyone know why this might be called Bath House Blues? 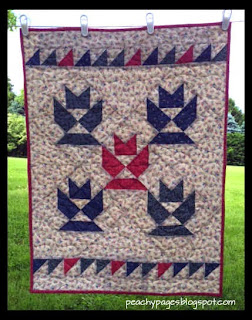 A couple more pictures...  Again, I chose that tiny blue diamond floral print to help this little quilt live up to it's name.  And, as usual I've added a hanging sleeve and label! 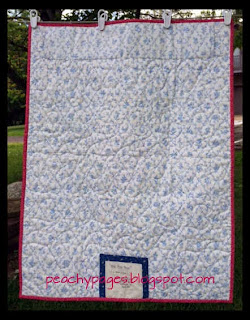 If interested, you can read all about my May UFO Goals here.  I did not have time this month to work on the "That 70s Quilt'" so that will go back on the list later this summer.  Instead I took on a different kind of project.  More about that in an upcoming post...

Linking up to Creative Goodness, Can I get a Whoop, Whoop?, Link-a-Finish Friday & ALYoF!

WIP: Ring Around the Hexies

It's retreat time!  This year, one of the guilds I belong to (Heartland Quilt Guild) is hosting a Quilt Away.  Pat Speth (Nickel Quilts), Cynthia Bonds (wool applique) and Mickey Dupre (Pieced Hexies) are all coming to teach classes and I'm so excited!

A ton of preparation goes into this type of retreat as you can imagine.  Of course, the hosting guild's retreat committee has been planning for several years to bring together the event and the instructors must organize and pack for their classes.  But I've never thought about how much the participants need to do to prepare!

I've spent hours choosing fabrics and cutting hundreds of 5" light & dark squares for Pat Speth's class.  I'm not sure what to expect from Cynthia Bonds' class as our supply list sheet was very vague (for ex. bring wool....how much??? measurements???).  I'll be bringing my Buttermilk Basin BOM wool applique project and supplies.  I've decided that if I can play along during the class with what I bring, great!  And if not, I'll have the project sheet to do later and I'll just work on my BOM.
Now, I've been looking forward to Mickey Depre's class since I heard she was coming (Pat Speth, too).  A while ago, I purchased the Ring Around the Hexies (from the Collaboration Celebration with Mickey Depre & Bonnie Hunter) as soon as it was available.  It's been sitting on my bookshelf ever since.  Well, I pulled that pattern out and sewed up the top.  The pattern features 4 pieced hexies and I'm hoping that those large blue squares will be the perfect background for the hexies I make in Mickey's class!

Now all I have to do is pack up everything else...

Linking up to WIP Wednesday and Let's Bee Social!

A Warrior's Faith by Robert Vera

I'm new to the world of book reviews, in fact, this is my first blogged book commentary.  With that in mind, here we go...

A Warrior's Faith, by Robert Vera, tells the story of Ryan Job, a decorated Navy SEAL blinded by sniper fire during a mission in Iraq.  The author, a friend of Job's, recounts Ryan Job's resilience, sense of humor, and determination in facing the obstacles of recovery, rehabilitation, and his "new normal," resolving to live each day to it's fullest and challenging himself far beyond expectations.  From SEAL training to Job's tragic death, this is the story of a real American hero who embodied the true meaning of inner strength and selfless service.

If you've seen the movie or read the book American Sniper, then you are already familiar with the sniper's bullet, on the rooftop in Ramadi, Iraq, that wounded Navy SEAL Ryan Job.  A Warrior's Faith tells the rest of his story from the point of view of a family friend and confidant.  Actually, that's the beginning of the book...the rest of the book tells the story of Robert Vera and, really, how he was affected by a friendship with Ryan Job.  Often, I wished for the focus to shift back to Ryan Job and his story, instead of the ongoing chronicle of Vera's friendship with Ryan Job and his role as sort-of an extended family member of the Job family.

Throughout the book, Vera often compared Ryan Job to the biblical Job of the Old Testament.  While many of the parallels were apparent and easy to agree with, there were several that seemed to be a stretch.  At those times it felt like the author was really trying to sell the correlations by reiterating his statements time and time again (this mostly happened at the beginning of the book and smoothed out by mid-novel).

A Warrior's Faith was a quick and easy read.  Through it, I felt like I got to know more about Ryan Job and the Navy SEAL brotherhood.  The author provides a simple timeline, at the back of the book, that would have been a great reference tool for referral (I wish I realized it was there while I was reading).  Several mentions of now familiar Navy SEALs, like Chris Kyle, from the books/movies Act of Valor and American Sniper add to the book's appeal.  As an Army wife, I empathized with Ryan Job's wife, Amy, (whom he married after his redeployment).  This book really appealed to my patriotism and reminded me once again of the sacrifices that our servicemen and women make for our American freedoms.  All-in-all a good read.

Disclosure of Material Connection: I received this book free from the publisher through the BookLook Bloggers <http://booklookbloggers.com> book review bloggers program. They did not require me to write a positive review. The opinions I have expressed are my own. I am disclosing this in accordance with the Federal Trade Commission’s 16 CFR, Part 255 <http://www.access.gpo.gov/nara/cfr/waisidx_03/16cfr255_03.html> : “Guides Concerning the Use of Endorsements and Testimonials in Advertising.” 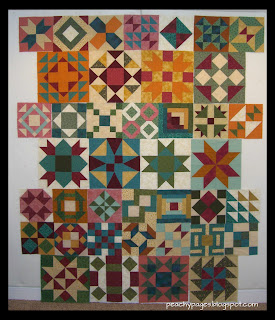 All 40 of my Women of the Bible blocks are finished!  Last Monday, part 1 of the finishing instructions were released including the setting blocks and top assembly.  Today, the pieced border instructions should be released!

I can't wait to finish up this top, I've been working on it for so long, but I've got a deadline quilt that must take priority.  Until then...

Linking up to Design Wall Monday & BOMs Away!

My First (and Only) Crochet Project 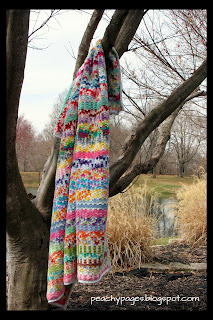 Last year I was admiring an afghan made by my friend, Debbie.  She told me the pattern was called Leaping Stripes by Tamara Kelly (on Moogly) and it was really easy!  The problem was, I had no idea as to how to read a pattern.  I haven't done any crocheting since I was a young girl (and it was all done by mimicking my nana's stitches), so Debbie tried to teach me how to mimick her stitches.  Well, I tried.  I made several rows over several weeks and got about 18" done by the time I showed it to her...and she tore out almost a foot of those stitches!  All my hard work!  And my aching hands!!!   I guess I wasn't getting the right number of stitches per row (I think she said I was dropping stitches?). 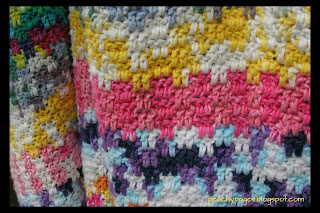 Well, I was frustrated, but I was determined to get it right...so I watched the video tutorial and tried to learn how to changes rows properly.  After alot of practice and redoing many corners...I got it!  Then I tried to match what I was stitching to the written pattern...and I kinda got that!  And, I was even able to stitch the border without any additional help (by reading the pattern)!

Linking up to Creative Goodness, Can I get a Whoop, Whoop? and Link-a-Finish Friday.

How's that for acronyms?  It reminds me of "Army speak!"  Did you catch the meaning?  WOTB BOW WIP = Women of the Bible Block of the Week Work in Progress!  And, since I haven't posted my blocks in a while...here are the blocks from the past 2 months:


Only one more block left at this point!  Monday will bring block #40 and after that, there are just finishing instructions (filler blocks and several borders according to the photos of the quilt).  So exciting!  Next week, after I've made block #40, I'll post a photo of all of the blocks together (if I can make them fit on my design wall)!!!

Linking up to BOMs Away and WIP Wednesday.

I'm going easy on my goals for May because I have a few workshops to attend the first week of June that I need to do alot of prep work for.  I also need to catch up on my color challenge spool blocks (both sets) and my Women of the Bible Blocks!  So this month, I've decided to try to finish these 2 projects, Bath House Blues (another Prairie Women's project) and That 70s Quilt (a restoration).

Currently, Bath House Blues is in a state of almost completion.  It's quilted, the binding is sewn to the front side, and the label and hanging sleeves are made.  All it really needs is the handwork done - stitching the label, hanging sleeve and binding down.  That's it...easy enough, right?
That 70s Quilt is another story.  First of all, it doesn't really have a name...That 70s Quilt is just what I'm calling it.  Really, if she want's to, my mom gets to name it because, well, my mom assembled this quilt before I was born, with remnants from an upholstery shop she worked at in NYC.  The poor thing has been well loved and well used (by me mostly - I confiscated it when I left home...yes mom, technically you did make me something before the afghan!!!).  So well loved and well used that it's pretty much falling apart.  It's had stains on the backing for more than 20 years, but now the front seams are coming loose causing the fabric to tear.  I really want to preserve it, so I'm taking it apart, block by block, to trim down, square up and reassemble to it's semi-original state.  I've already purchased a new backing (also an upholstery fabric) and washed it with fabric softener to alleviate some of the stiffness.  If I can reuse the batting (who know what's really in there...could be a whole other blanket, hehe) I will, if not...it will take several layers of batting to get the poofy comfy feel that I love about this quilt and that I want to maintain.   I'll re-tie the ties...it was never "quilted."  And, originally there was no binding; it was just turned under.  I'm thinking I'll probably bind it, this time around, for more structure and stability from the wear and tear I seem to lay on it.  I want it to last forever!!!
Well, there they are, my goals for May...Bath House Blues & That 70s Quilt (& workshop prep & & Color Challenge & WOTB catch up)!

Linking up with ALYoF! 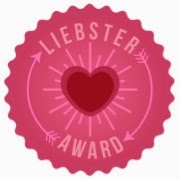 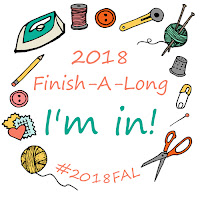