I've been participating in Angela's Rainbow Scrap Challenge for several years now.  It's a really fun way to remember to use all of the scraps I have seperated by color.  Bonnie Hunter's scrappy patterns often lend themselves well to this challenge (I can really even out the color distribution in the scrappy bits by deciding how many units I'll need to make each month) and each year I usually pick one of her designs to concentrate on for the RSC.  This year I chose to work on units for Spoolin' Around (no pictures today).

Since I decided on spools, there was another spool quilt that kept swimming in my head and I based these blocks on a tutorial by Jenny at Missouri Star Quilt Company.  The only difference...I'm using string piecing on paper foundations, Jenny used pre-cuts! 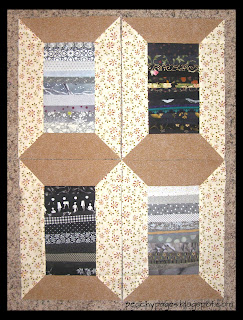 Angela choose NAVY BLUE (which I already covered in my January BLUE blocks).
She also gave the option to substitute BLACK & GREY (so I did)! 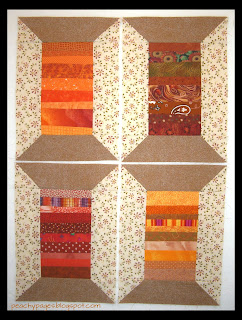 She chose ORANGE for September RSC 15.
And...Angela just announced that October's color will be BROWN!

I'll try to remember to post some pictures of my little spool units for Spoolin' Around soon.  I usually stay just a bit behind on them because I'm strictly using them for leaders & enders!

For fun stuff happening today in the blog-o-sphere, check out the link-ups on my sidebar!

I love to read your comments and I'll try my best to answer any questions. Please, just let me know you've dropped by!